One of the most popular and tourist-heavy islands in Croatia is Hvar, and it is mostly known for its many beaches and vibrant nightlife. There is more to this island than lounging in the sand or partying. However, you just have to see the white stone Renaissance structures in Hvar town and you’ll know there’s a lot to see here than the pebbled beaches and stunning bays. Here’s a list to guide you on where to go and the best things to do in Hvar.

1. Check out Tvrdava Fortica in Hvar

This fortress that we see today was constructed in the 13th century by the Venetians, on a site where a 6th-century Byzantine citadel used to be. One of the best places to see in Hvar, the Tvrdava Fortica or Hvar fort served as a shelter in the late 1500s when an invading Turkish army attacked and destroyed the town.

It’s also called the Spanish Fort or Trvdava Spanjola as Spanish engineers worked on it during the 14th century.

The Fortress now houses a museum featuring artifacts related to its history, and because it is perched on the hills of the pine forests, it is also an ideal lookout point over Hvar town and the nearby islands.

Situated on a little cove just a quick walking distance from the main Hvar Riva is the stunning Franciscan Monastery. This 15th-century structure houses a lot of treasures you definitely should check out — such as a collection of Greek, Roman and Venetian coins; rare amphora, and even an old edition of Ptolemy’s Atlas, dated 1524.

You’ll also find here a gorgeous painting of The Last Supper, which is said to be done by Venetian painter Matteo Ingoli. In the monastery’s garden, you’ll find A 300-year old cypress tree. Located by the beach, this is a great place to visit in between swimming and soaking up the sun.

3. See A Different Side of Hvar Old Town

As one of the most popular and busiest islands in Croatia, Hvar’s old town square can be pretty crowded and it’s easy to get lost among its posh patrons or scurrying backpackers, even those scrambling for the next ‘Instagrammable’ photo.

If you’re looking for something different to do on a free morning or quiet afternoon, take a few steps away from the main square and up crumbling stairways, then down into winding stone alleys and lanes for a glimpse of what daily life in Hvar really is like.

Experience the sights, sounds or smells of this side of the old town as you stroll past houses, meet locals and see what they’re doing, or watch and know a bit of their stories. It’s one of the best activities to do in Hvar if you’d like to know it better, as you experience being a local even for a few hours.

One of the best things to do in Hvar is to sample their local food, and you can start with borek (or burek). This delicious pastry is found in most Pekaras (bakeries) and most of them are open until the early hours of the morning so you’re sure to find some to try. It is a puff pastry filled with cheese, meat or spinach — a quick snack you can enjoy any time of the day.

You’ll also enjoy a lot of fresh seafood in Hvar as it’s economy is mostly based on tourism and fishing. Make sure you sample some local seafood dishes while you’re in the island.

You can’t go wrong with ordering baked mussels or served in pasta, fried or grilled squid or surprise yourself with the catch of the day.

A natural reserve and a UNESCO World Heritage site, the Stari Grad Plain is one of those unusual attractions you’ll come across in Hvar. The landscape in this area has remained intact since the 4th century BC during the colonization by the Ionian Greeks.

Stari Grad Plain has ancient stone walls and old stone shelters and showcases the land parcel system set up by the Greeks. This system makes it possible for grapes and olives to be cultivated at the same time uninterrupted for the past thousands of years.

This has been a model farming method now used all over Europe which is effective and sustainable. The best way to visit the Stari Grad Plains and explore the area is on a bike, where you can cycle through vineyards, olive orchards, and vegetable farms.

It is one of the best things to do in Hvar where you get to experience local culture and history while enjoying the stunning scenery.

Hvar is also known as the ‘ Island of Lavender’, and with Croatia being one of Europe’s largest lavender producers, you’d definitely come across a variety of lavender products being sold around town.

There are bottles of lavender oils, scented laundry sachets, soap bars and more all marked with ‘Lavandula Croatica’.  There’s also a ‘Lavanda’ flavored ice cream, and you should ask for a tiny scoop to try first.

It’s pretty interesting as it tastes like perfume sorayed on your mouth. Love it or hate it, it’s surely worth a try.

A hidden gem that’s among the best places to be for some spectacular views over Hvar town and the nearby Pakleni islands, the Napoleon Fortress is probably the perfect spot to watch the sunset. Also known as Trvdava Napoljun, this is situated on the west of the main Spanish fort.

Reaching the top involves a 4-kilometer hike, one of the best things to do in Hvar that rewards you immensely with a stunning perspective of the old town and the Adriatic.

This is the largest old square in the Dalmatian region and is probably one of the prettiest in Europe. This area is surrounded by Venetian and Renaissance architecture as seen in the nearby Cathedral of St. Stephen, the bell tower and Arsenal.

Also known as Hvarska pjaca, this is the center of public and social life in Hvar. A good place to just enjoy the flurry of activities and people watch while sitting on the steps, St. Stephen’s Square is one of the top attractions in Hvar and an ideal place to meet locals or enjoy some delicious börek or ice cream.

Built during the 16th and 17th centuries, the baroque Hvar Cathedral provides the picture-perfect backdrop to the adjacent St. Stephen’s Square. Step inside and see some stone reliefs as well as the 16th-century choir stalls.

It is definitely one of Hvar’s attractions, further highlighting its rich history and heritage.

Hvar is known for its beaches — whether sandy or pebbled, in secluded coves, below forested cliffs or in hidden bays. A lot of these are close to Hvar town but if you want to enjoy a different brach hopping experience, head on to the nearby Pakleni Islands.

Just a short boat ride from the main island, renting a boat you can use to go island and beach hopping is one of the best things to do in Hvar on weekends.

Some of the best beaches you must visit in Pakleni are Zdrilca beach, Milni beach, and the two longer unnamed bays after Vinogradisce. 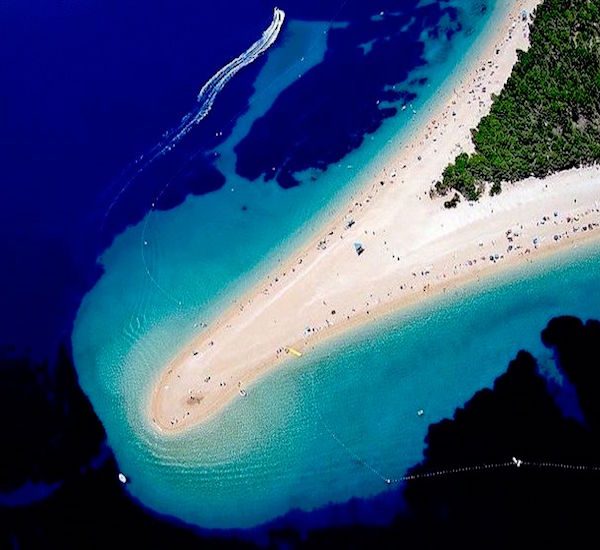 12 Must-See And Best Castles In Croatia