Located in the region of Slavonia in Eastern Croatia, the city of Osijek is a complete departure from the usual destination in the country. It has the river Drava instead of the Adriatic or the lakes and waterfalls of Plitvice. There are a picturesque street and Rivas that stretch for several kilometers instead of islands.

And there are culinary delights, wineries, breweries and strong coffee culture in place of castles featured in TV shows or quirky museums. Different, but definitely worth spending days on if you’re going to Croatia.

Curious yet? Read on to find out more about which places to visit and what are the best things to do in Osijek, Croatia.

10 Best Things To Do in Osijek, Croatia

1. Walk Down The European Avenue, Osijek

Osijek’s European Avenue is a colorful, lively and picture-perfect street. Stroll down and take in the impressive architecture, making your way from the Old Town (Tvrđa) to the city center to the Korzo promenade which then leads to the main square.

Be sure that while you’re walking along what is considered to be the most beautiful street in Osijek, stop and look at the impressive Secessionist architecture as seen in the row of palaces.

You should also visit the Museum of Fine Arts as well as the city library, which is housed in buildings with equally fascinating design and history.

2. Climb On The Top Of Bastion 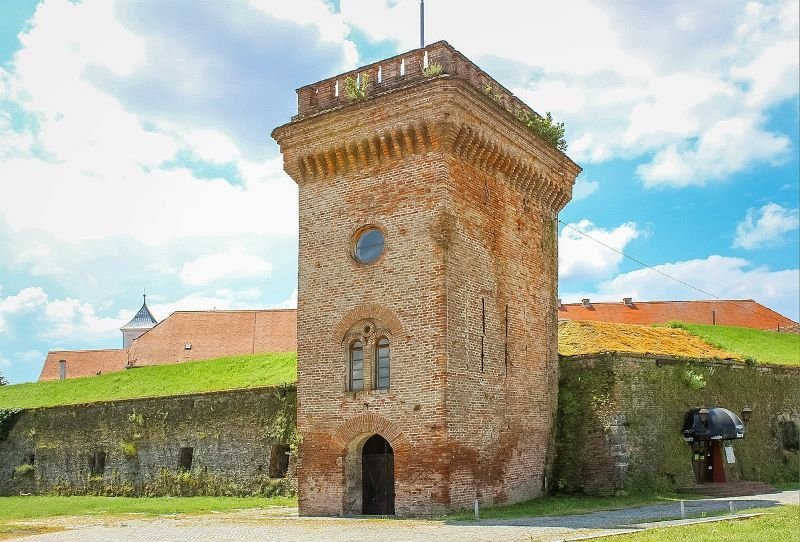 Among the best activities to do in Osijek is to climb up the defensive wall around the old town called the Bastion. This is a picturesque area that also offers scenic views over downtown Osijek. It can be reached through a flight of stairs that you’ll find by the Water Gates.

The to of the Bastion is grassy, making it ideal for relaxing while enjoying views over the city, and you can even have a picnic.

3. Cross the Pedestrian bridge in Osijek

One of the three bridges that pass over the river Drava in Osijek, the Pedestrian Bridge is also a popular landmark. This stunning suspension bridge opened in the 1980s and a popular thoroughfare that connects two sides of the river Drava.

A walk along this bridge is one of the best things to do in Osijek during the night when it is brilliantly lit and even more beautiful.

4. Stroll Along the River Drava

The promenade that spans the shoreline of rivers in Croatia is called Riva, and Osijek happens to have what’s said to be the most beautiful in Croatia. Stretching up to several kilometers on both sides of the river Drava, this Riva is among the best things to see in Osijek.

The city side Riva is a picturesque area often littered with families or friends taking leisurely strolls, as well as cyclists or skaters. It has some of Osijek’s best attractions such as the old city walls and the pedestrian footbridge.

The opposite side of the river meanwhile is more rustic and closer to nature and is preferred by joggers or those who want to enjoy fewer crowds and a quieter walk.

The Neo-Gothic Osijek Cathedral is the tallest structure in Croatia that’s not in Zagreb. This church was heavily damaged by the war during the early 1990s but was immediately restored when the conflict ended. Putting it back together was a priority for the city, evident in how majestic it looks now.

This is among the best attractions in Osijek and a must-visit if you’re into architecture or simply want to admire something beautiful. It’s also well-loved as the church walls offer a cool respite from the scorching heat especially during summer months.

6. Check Out the Catacombs

If you’re up for something intriguing and mysterious while in Osijek, the Catacombs is an ideal place to visit. With influences from those that used to occupy the city such as the Turkish, Austro-Hungarians and Romans, the architecture of the catacomb remains undefined but fascinating nonetheless.

It is said that a network of tunnels is all over the city, and that sone evidence is actually in Tvrđa. The catacombs are said to be part of that tunnel network but being located on the other side of the river Drava, it was abandoned and forgotten. However, it does provide a rather charming backdrop to music events during summer nights and remains to be one of the best things to see in Osijek.

Home to the most number of well preserved Baroque structures in the whole of Croatia, Tvrđa is one of the best places to see in Osijek. It is the city’s Old Town area and is actually the administrative, cultural and educational center of Osijek and the whole region.

Be sure to check out the Habsburg star fort, which dates back to 1687, constructed after the victory over the Ottoman forces. Its tower still stands on the hill and visible from the Drava river. The interiors of the fort have been transformed into a nightlife hub where there are bars and restaurants which is also among the most-visited parts of the city.

Great food is one of the highlights of any visit to a new locale and in Osijek, the gastronomic delights are something you’d talk about even back home. Croatia has always been proud of how the country’s food is prepared — made from naturally-raised food ingredients, with no enhancements, no chemicals added and definitely no preservatives.

This city is no exception and feasting on their food is one of the best things to do in Osijek. Most dishes are hearty, savory and spicy, as they’re usually are cooked or prepared with paprika.

Nearly everything is a must-try as they’re guaranteed fresh and delicious, whether it’s cured meat, hearty soup, roasts, or tasty pasta dishes. Some dishes you need to try are the River Fish Stew, the Parklet (thick stew with strong beef or venison flavors), and Čobanac (spicy stew best with wild meats like boar or venison).

You also must not pass up the chance to try Kulen (paprika and garlic spiced pork sausage), and Slavonska pizza which is made with bacon, ham and Kulen, mushrooms, onions, few chili peppers and either with sour cream or an egg on top.

After feasting on their food, it’s time to sample the drinks. In Osijek or anywhere in Croatia, you’re pretty much torn between wine, beer, and coffee. The areas surrounding Osijek is best for growing grapes, so winemaking has been in this region since Roman times.

Wines to try include reds made from Cabernet and Frankovka grapes, the crisp and light whites from the Slavonia region, and the cuvée wine from Josic. Meanwhile, Osijek’s very own Osjecko beer is the first-ever beer in Croatia, dating back to 1697, and still being made up to this day using the original recipe.

Osijek has also caught on in the craft beer craze and there are pubs that offer both local and international craft beers. Lastly, another drink that’s a must when you’re in Osijek is the coffee. There’s a strong cafe culture here and you’ll find a cafe nearby every way you turn. Slow down after a hearty meal with a cup of coffee, drink it slowly with a dessert or with something to read, even while strolling around the city.

10. Hop across the border

Located close to the borders of Bosnia, Hungary, and Serbia, Osijek provides a variety of opportunities to visit any of these countries for a day trip. The last two are specifically closer, so one of the best things to do in Osijek is to just ho off a bus or train and go.

There’s Novi Sad in Serbia, which is the second-largest city, that has pretty much the same vibe as Osijek. Then there’s the city of Pécs in Hungary that also has a rich culinary culture and a definite must if you want to sample more hearty and delicious food. A must-try is the ethical foie gras, served with rich onion and paprika sauce and rustic bread.

11 Best Things To Do In Trogir, Croatia

12 Best Things To Do In Dubrovnik, Croatia