Located in the northwestern region of Croatia in the Istrian region is the idyllic port city of Rovinj. This stunning city is best known for the tall bell tower that’s often seen in postcards, but there’s more to see here than that iconic structure. How about a stroll through the picturesque old town? Maybe you want to climb up that bell tower?

Being situated by the Adriatic coast, there’s bound to be beaches and islands to visit from Rovinj, or maybe you’d want to venture out to another town or city for a day trip? Rovinj has so much to offer. And if you’re visiting this stunning city soon, here’s a list of where to go and things to do in Rovinj, Croatia.

11 Things To Do in Rovinj, Croatia

One just doesn’t get enough of Croatia’s old towns, and Rovinj is no exception. A walk through the cobblestone streets of its quaint old town is one of the best things to do in Rovinj.

See the remains of the old town gates or the defensive walls, or admire the architecture of structures that date as far back as the 1700s. This car-free old town also has a square where you can sit and relax a bit, as you watch people and see a bit of local life, or look out for Balbi’s Arch, which is the original entrance to the town. ‬

The Punta Corrente Forest Park is also called Zlatni Rt by the locals, and one of the best places to visit in Rovinj. This park was founded by Austrian Admiral Baron Hutterott in 1890 who also kept a q villa on Crevni Otok.

If you’re up for long walks, cycling or swimming, the park has well-maintained trails and easy access to the waterfront. Known for its fairytale-like appeal, the park also has ten species of cypress trees spread throughout the park, which then leads up to the waterfront. From the park and off the shores of Rovinj.

The Punta Corrente Forest Park is only 20 minutes on foot from the center of town and is a great place to be in if ever you want to get away from the crowds usually filling the streets of Rovinj.

‪A unique place to see in Rovinj is the Batana Museum. Unlike most museums that feature items related to a certain locale’s culture, history, and lifestyle — this museum focuses on the impact of the Batana boat to the people of Rovinj. Batana is a fishing boat with a flat bottom and is an integral part of the city’s culture and history.

This museum is located by the Rovinj Harbor, housed in a historic 17th-century townhouse and features interactive displays. Aside from the exhibits, the museum also hosts events where you can ride the batana and have a traditional Croatian meal after, as well as visits to a local fisherman who will demonstrate the art of mending a fishing net.

January/February/December:
visits only by prior arrangement!

Most photos or postcards of Rovinj features a shot of the city from the Adriatic and one easily notices a tall structure that stands out. That’s the bell tower of the iconic St. Euphemia Church, located at the heart of the city which is also its highest point.

The construction of this majestic church was completed in 1736, and dedicated to Rovinj patron saint, St. Euphemia. The church also houses St. Euphemia’s remains, and is one of the best attractions in Rovinj.

Its prominent bell tower is also a must-see, and climb up is almost a ritual for those who visit the church. The stairs are rickety, but once you reach the top, you are rewarded with fantastic 360-degree views over the city of Rovinj and the nearby Adriatic.

5. Rent a Bike and Hit the Trails

Going beyond the Old Town of Rovinj is a must, as there’s more to see. The rest of the Istrian peninsula where the city is a part of is also among the most scenic places in Croatia. A great way to explore these areas is on two wheels, which you can easily do as there’s plenty of bike rentals in the area.

You can rent for a few hours or a few days, it all depends how much time you’d like to devote to cruising the beautiful countryside. Start your journey in Ikd Town and follow the well-kept bike path that winds through the city to the countryside.

This easily tops the list of activities to do in Rovinj as the landscapes beyond the city center are quite breathtaking. Cycle through lush forests and vineyards, past ancient churches and quaint villages, and even glimpses of the Adriatic crystalline waters. Make it part of the Rovinj itinerary to fully experience this charming Istrian city.

Grisia is another face of Rovinj’s Ild Town that’s worth a visit. It’s like a living museum where you’ll walk through winding alleys instead of hallways, and on display are a variety of architectural styles.

This area was where the population boom in Rovinj started, and buildings were constructed to accommodate residents and small businesses. Lining the cobblestone streets are gorgeous Baroque, Gothic, Neoclassical and Renaissance-style buildings.

Along with these lovely old neighborhoods are charming little cafés and shops, as well as art galleries. A walk through Grisia is one of the best things to do in Rovinj as it has a distinctly local vibe and you get to witness a bit of its history as well.

Any place in Croatia is a good place to sample their wines, and each region offers something different. Known as one of the best wine regions in Croatia, you simply shouldn’t pass up an opportunity to sample a few sips while you’re anywhere in Istria.

In Rovinj, you can go to bars and wine shops to try some, or you can visit wineries outside of the Old Town. Always one of the best things to do in Rovinj, you may also join a wine tour that takes you through the vineyards and wineries close to town.

‪Istrian truffles are known all over to be among the best along with those from Italy. Be sure to sample local dishes that use truffles, or better yet, bring home a jar (or five) from one of Rovinj’s open-air markets such as Valdibora.

Buying truffles just has to be among the things to do in Rovinj because they’re that good, and truffles can be part of a variety of dishes so they’re quite useful.

This is one Rovinj activity that you shouldn’t pass up and while you’re shopping, be sure to buy some olive oil, honey, and lavender products, too. ‬

Sunsets in Croatia are said to be among the best in the world, and travelers rave about the play of colors in the sky as the sun rests, reflected in the speaking waters of the Adriatic.

Of all the cities in Croatia, Rovinj is among those places where the sunset is even more beautiful for some reason. See it from the top of Saint Euphemia’s bell tower, or from a bench in the town square, on to of a hill as you stop during your biking tour, or bu the harbor, or by the fishing boats lining the pier.

Different places, a unique perspective from each, but all equally beautiful. The sunsets are definitely one of Rovinj’s attractions that you shouldn’t miss.

Being situated by the Adriatic in a country that’s made up of over a thousand islands, this has to be among the best things to do in Rovinj. In itself, this city has 14 islands, all characterized by lush, green grass and pristine beaches.

Each island is a good place to visit but most recommended going to the islands of Saint Andrews or Saint Catherine, which are closest to the coast of the old town.

Only around five to fifteen minutes away by boat, these islands are perfect for leisurely strolls by the beach or you can also visit their old cathedrals. If you’re after some great views over Rovinj town, the coast and neighboring island, a must-visit is the ‪Hotel Katarina on St Catherine Island. ‬

If you have more time and want to make the most of your stay, one of the best things to do in Rovinj on weekends or any other day is to venture out to another city, or even another country.

Rovinj is a great base to explore other places even for a day. Around Croatia, some of the best places you can visit from Rovinj are the ancient town of Pula with its Roman amphitheater and the romantic Istrian hilltop towns of ‪Motovun‬ and Groznjan.

You may also go on a road trip to Slovenia and explore the Postojna Caves or board the ferry to Venice and cruise through the famous canals of this beautiful Italian city.

10 Best Things To Do in Osijek, Croatia 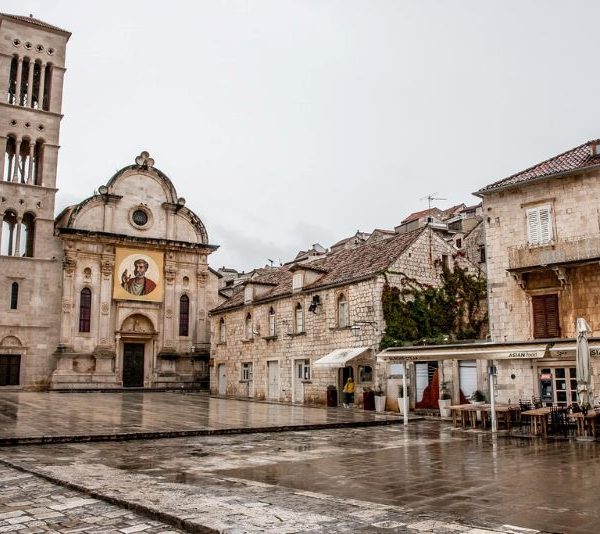 Croatia in September: Weather, Things to See and Travel Tips